5 Companies With Inspiring Examples of Diversity Equity and Inclusion

Diversity, Equity and Inclusion (DE&I) is not just a moral issue, it’s also a practical one. All data says the same thing: diverse and inclusive companies are more profitable, perform better, and have an easier time attracting recruits.

But what should you be aiming for in your DE&I strategies? It’s a tough question for HR managers who find themselves responsible for building an inclusive workplace. There’s so much to do that it’s hard to know where to start.

A good place to start is by looking at the companies getting it right. Here are some of the biggest innovators in the world of DE&I.

5 of the best companies for diversity, equity and inclusion

Most of the companies below are major multinationals. They have the people and resources to allow them to run ambitious DE&I projects on a global scale.

Your company might not be quite as big, but you can still learn a lot from their strategies. Also, it’s worth noting that these initiatives are guided by extensive internal research. These companies are pursuing these strategies because they know they work.

Employee Resource Groups (ERGs) are mutually supportive groups that give colleagues a chance to share experience, receive coaching, and advocate change. Healthy ERGs can play a key role in your DE&I strategy – but only if they have leadership support.

Accenture consistently ranks as one of the best employers for DE&I in the world. That’s partly because of their well-supported ERGs that offer international support for employees from marginalized groups.

Two of their biggest ERGs are:

Accenture also has a lot of other things to be proud of, such as the fact that 42% of Accenture executives are women. But these ERGs play a massive role in creating a welcoming experience for staff at every level.

2020 was a turning point for many organizations. The murder of George Floyd and the civil unrest that followed caused leaders everywhere to think about their role in ongoing inequality.

Microsoft took a bold step forward by committing to their Black employees and working on increasing Black representation within the company. In July 2020, Microsoft CEO Satya Nadella announced that the company would:

The company also launched its own Amplifying Black Voices program, a multimedia series that highlights some of the Black leaders, thinkers and innovators that are changing the world.

ViacomCBS – Women in the C-Suite

Gender disparity is still a major issue, especially at the top. Women only 23.5% of board seats at companies on the Russell 2000 index, and that number drops to 16.9% globally. At this rate, we can expect to see gender parity in the boardroom sometime around 2040.

But some companies are ahead of the curve, and a few even have majority-female boards. One such company is the communications giant ViacomCBS, an organization that where women represent:

These numbers are not accidental. ViacomCBS has invested heavily over the years in its Female Talent Program to help women step into a leadership path. The company has also pursued a robust internal DE&I strategy to create a supportive and encouraging environment.

Organizational culture can be a significant barrier for people with disabilities. Many companies simply don’t put enough thought into accessibility, which is why 60% of employees with disabilities feel excluded at work.

Proctor & Gamble has been working to reverse that, and is currently on a mission to become “the most accessible company in the world”. They are realizing this vision by taking some serious internal steps, such as:

This is a great example of how internal DE&I initiatives can make for a better customer experience. Accessibility is such a fundamental part of the conversation at Proctor & Gamble that it has now started to influence product development and marketing.

One of the biggest issues in DE&I is the lack of shared experience. Many people want to be more inclusive, but they simply don’t understand what it’s like to be part of a marginalized group.

How will your business tackle DE&I this year?

The companies above are leading the way in DE&I progress, but they still all have one thing in common: they’re not quite there yet.

DE&I is a journey rather than a destination. There will always be new challenges to deal with and new opportunities to make improvements. For HR leaders, that means that you always have to make DE&I part of your long-term strategy.

Need some expert guidance? Set up a no-obligation consultation call today and speak to a Helios HR consultant. Let’s chat about how you can take your DE&I strategy to the next level. 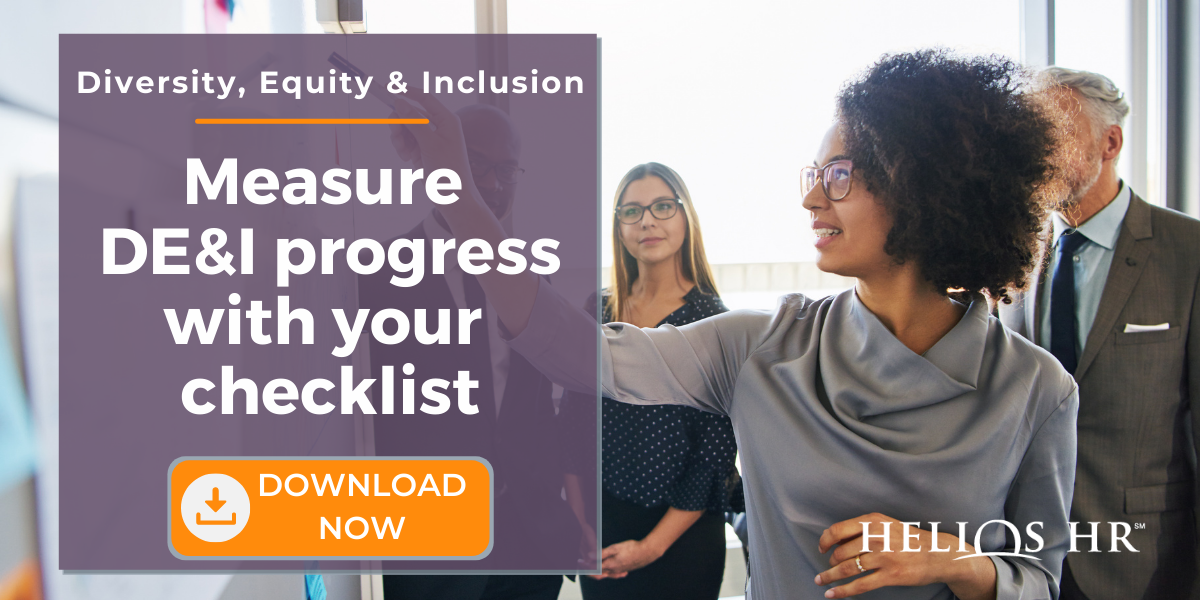